By Alex Colovic  on Mar 19,2015
My Tournaments Personal - No Comments
Here’s Part 2 of the Reykjavik in photos (click to enlarge). On a sunny day you can see Mount Esja (incidentally, the name of the hotel Spassky was staying in in 1972 was also Esja) across the water: 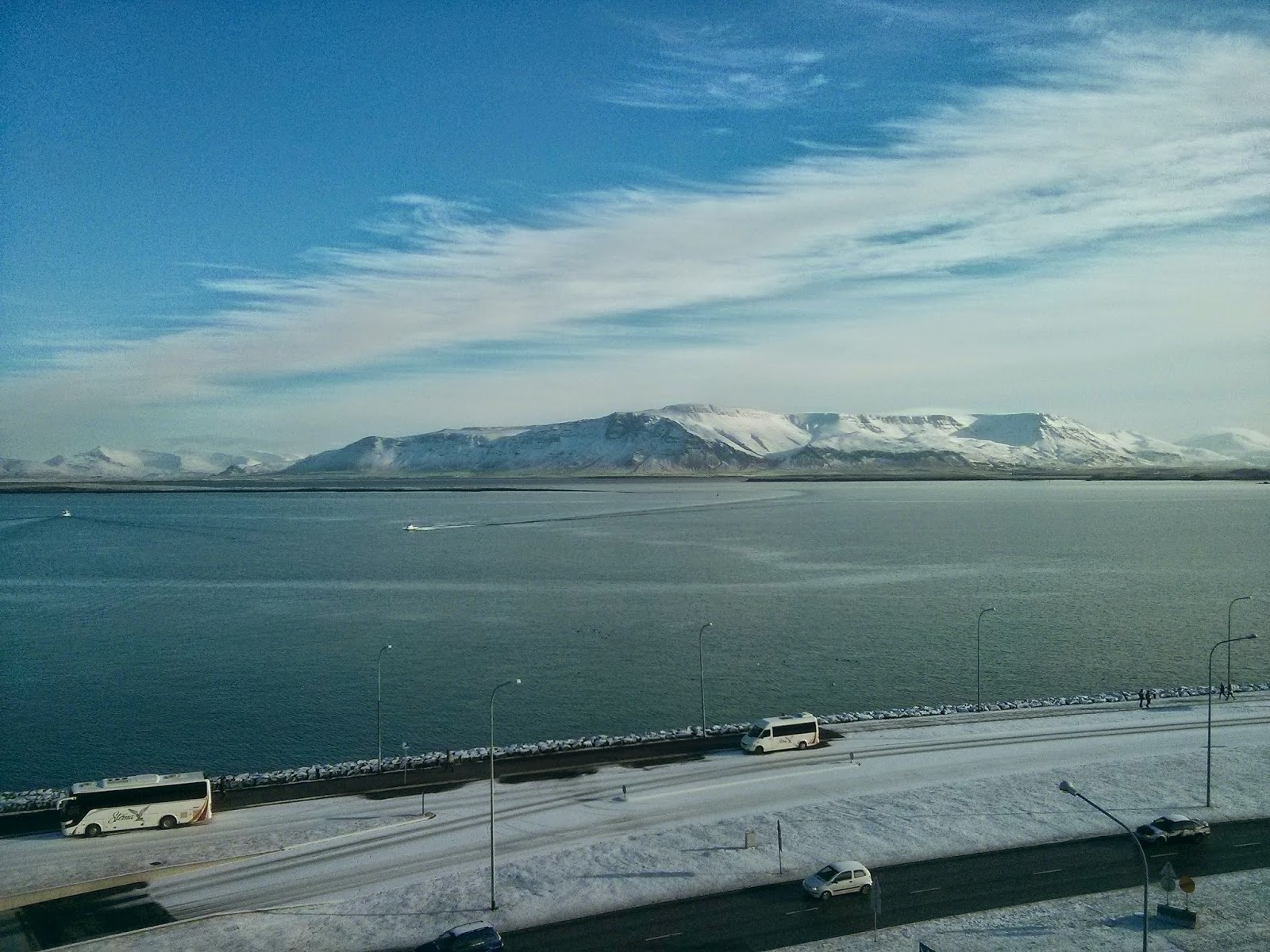 An attempt to capture the northern lights, not a very successful one, after all I only use a mobile phone. Believe me, it’s amazing: 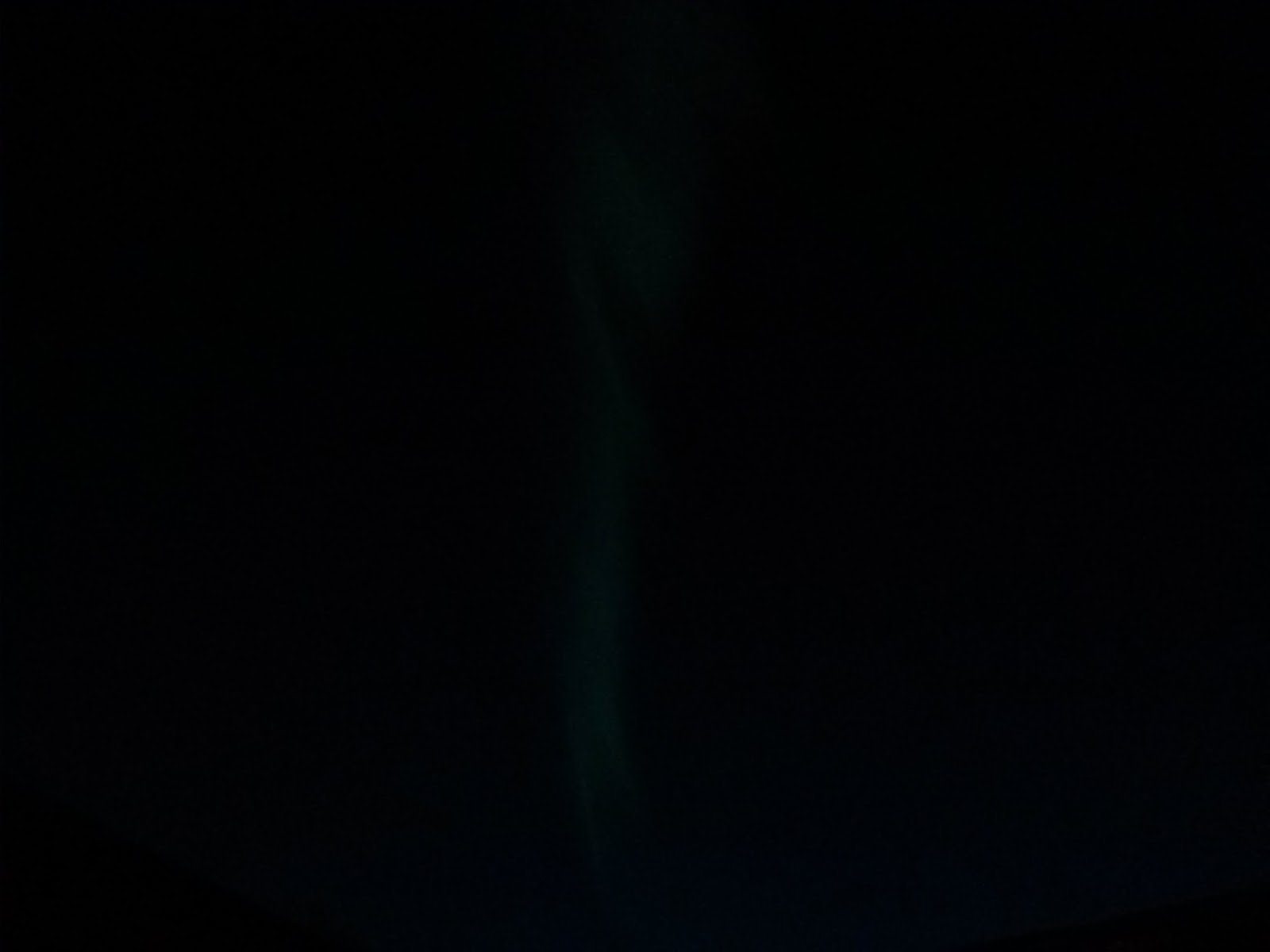 The Batgirl at the closing ceremony with her IM-norm certificate: 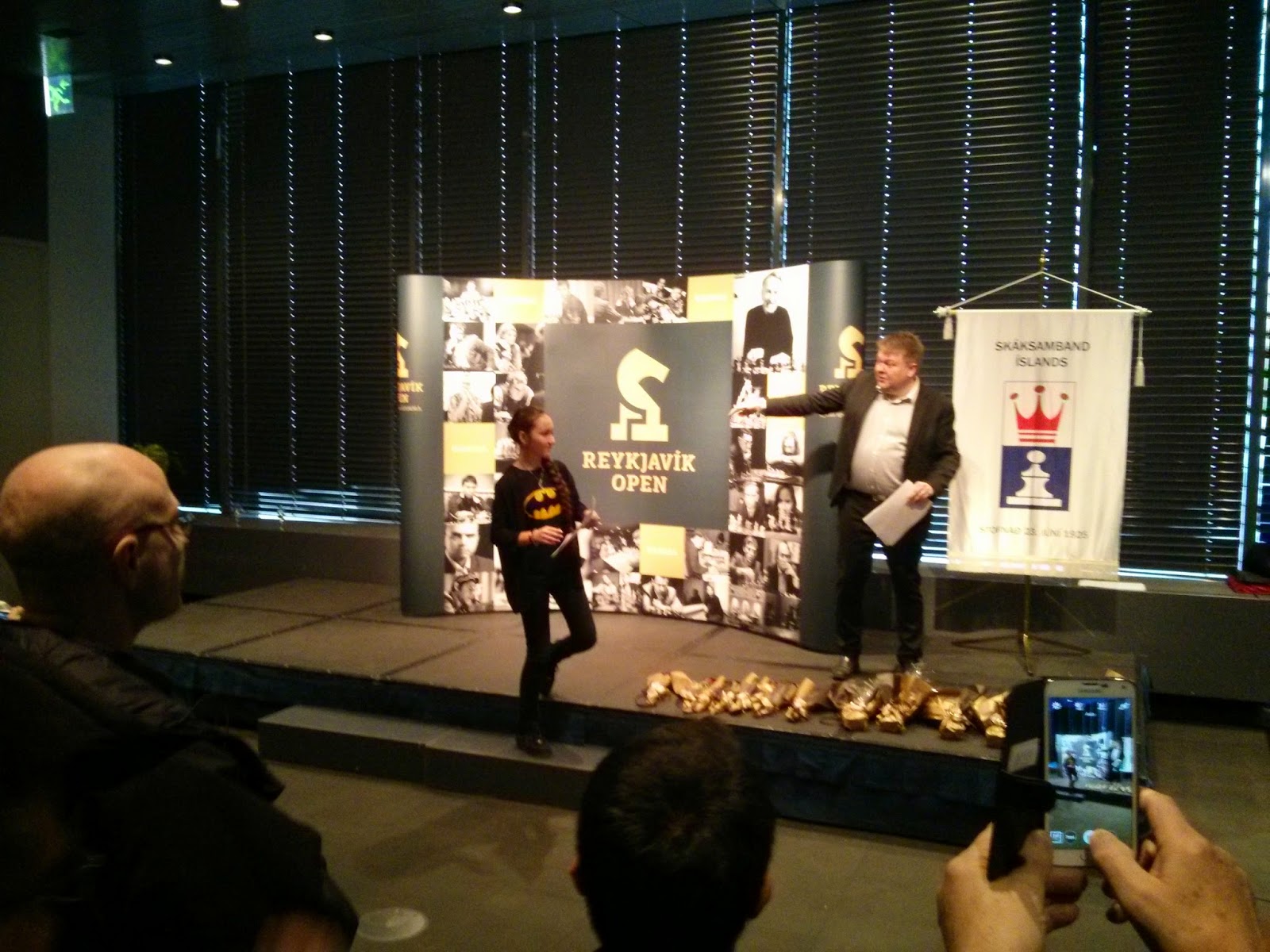 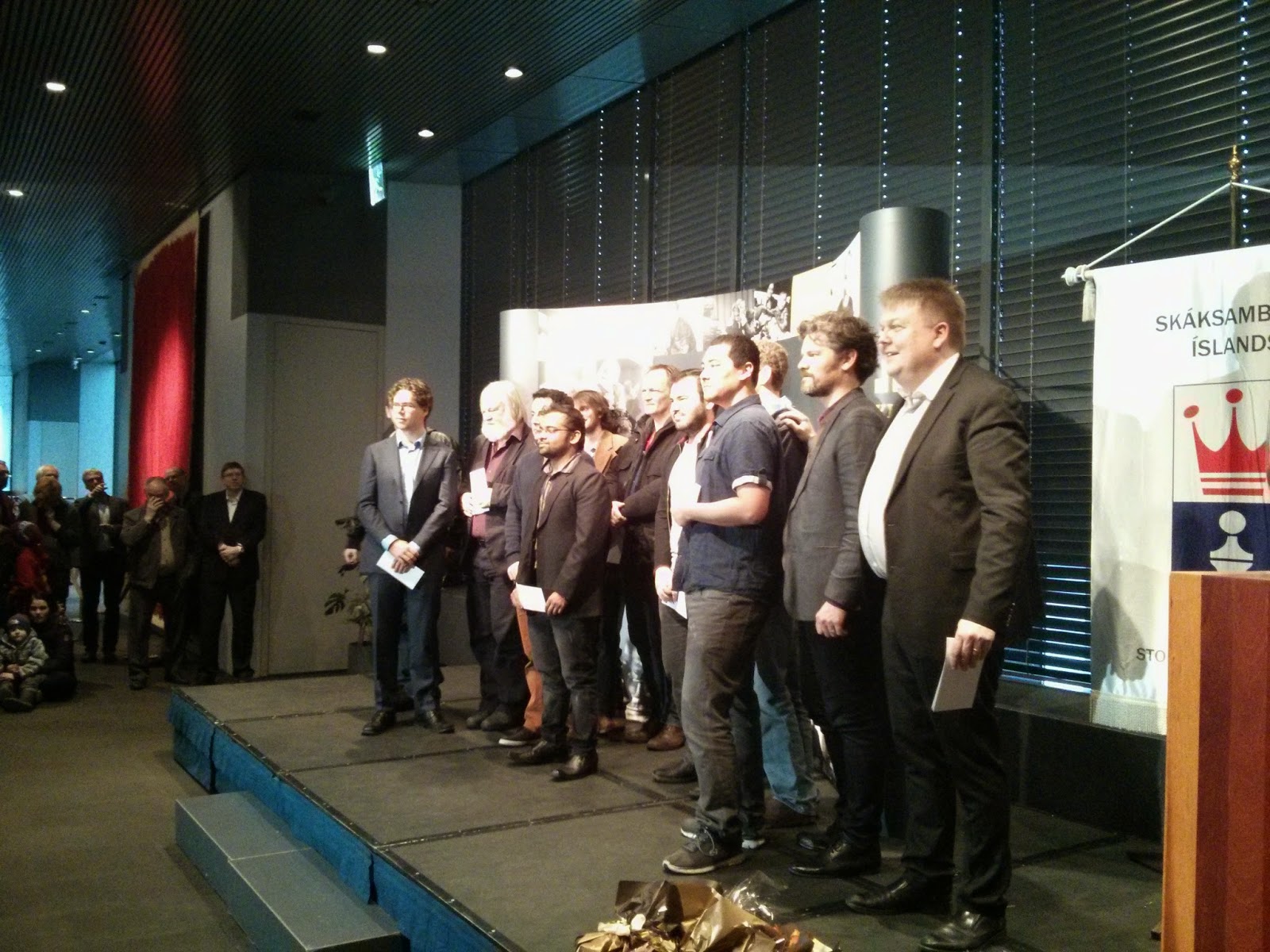 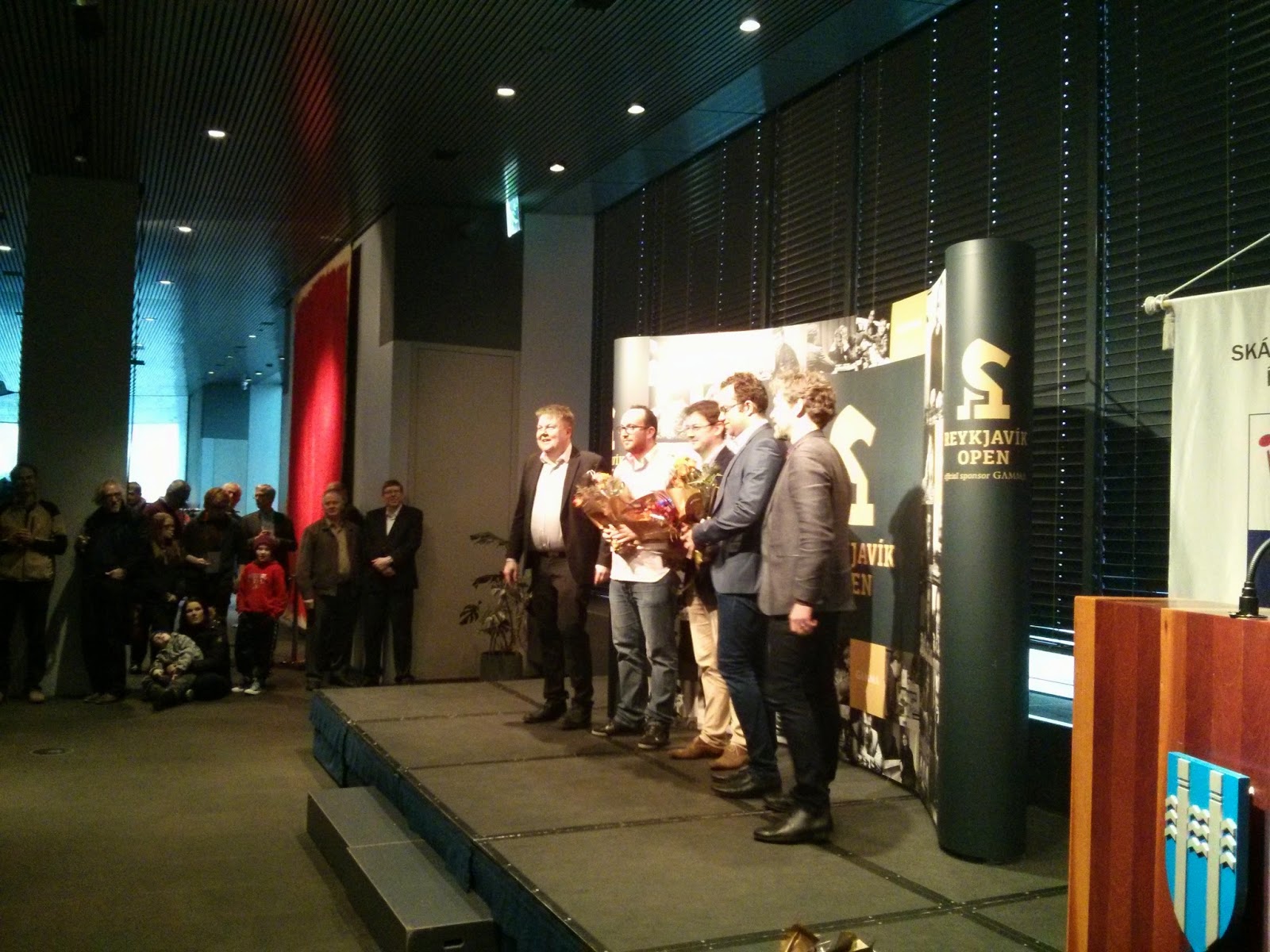 The best commentators in the world (you can forget about Peter Svidler and Nigel Short), Fiona and Ingvar Thor: 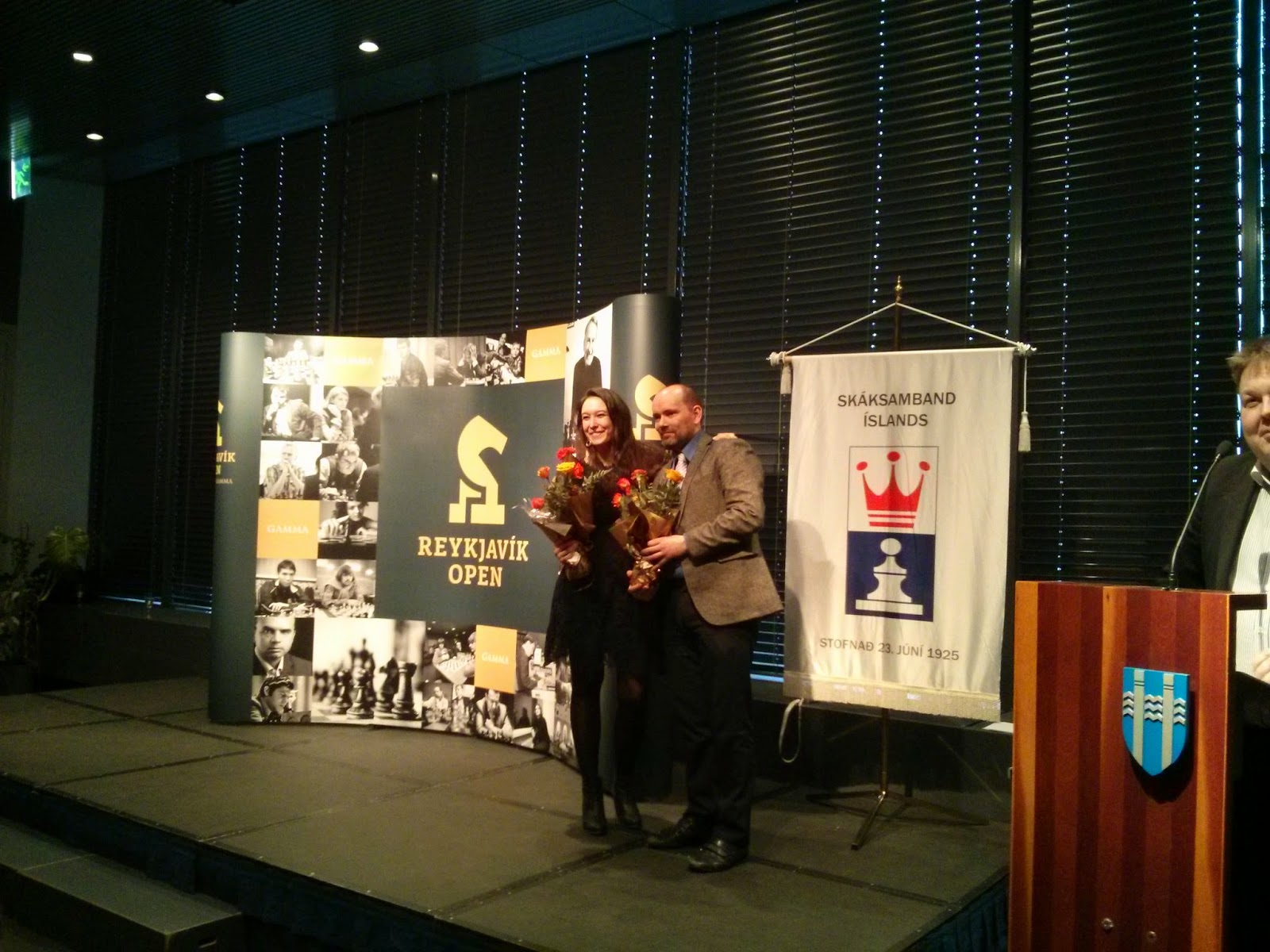 By Alex Colovic  on Mar 13,2015
My Tournaments Personal - No Comments
Unfortunately there was no Magnus Carlsen today at the round, his flight had been delayed because of the typical Icelandic weather of strong wind and heavy rainfall. In the absence of the World Champion here are a few other photo impressions from the playing hall and around (you can click on the image to enlarge).

The look belongs to Zhansaya Abdumalik, a 15-year old WGM with the formidable rating of almost 2400. She’s one of the brightest world talents and possibly a future World Champion. A few more shots of Zhansaya:

And now time for that sauna and jacuzzi!

By Alex Colovic  on Mar 09,2015
My Tournaments Personal - 2 Comments
It isn’t easy to get that up north. For me it meant flying to London first and then continuing the next day to Reykjavik. The flights were smooth and relaxed and when I landed today at Keflavik airport I was surprised to see everything covered in snow. Now I am surprised I was surprised, knowing where I was going, but coming from continental Europe where spring is slowly approaching and all-white scenery belongs to the memories of January, it is perhaps undestandable.

I checked in in the Arnarholl Hotel across the Harpa (where we will play) and then took a walk, just to refresh my memory of the city. My body also refreshed its memory of the temperatures here, which promptly forced me to go back to the hotel. But one thing caught my attention on my way back. What does a film festival have to do with the strongest engine? 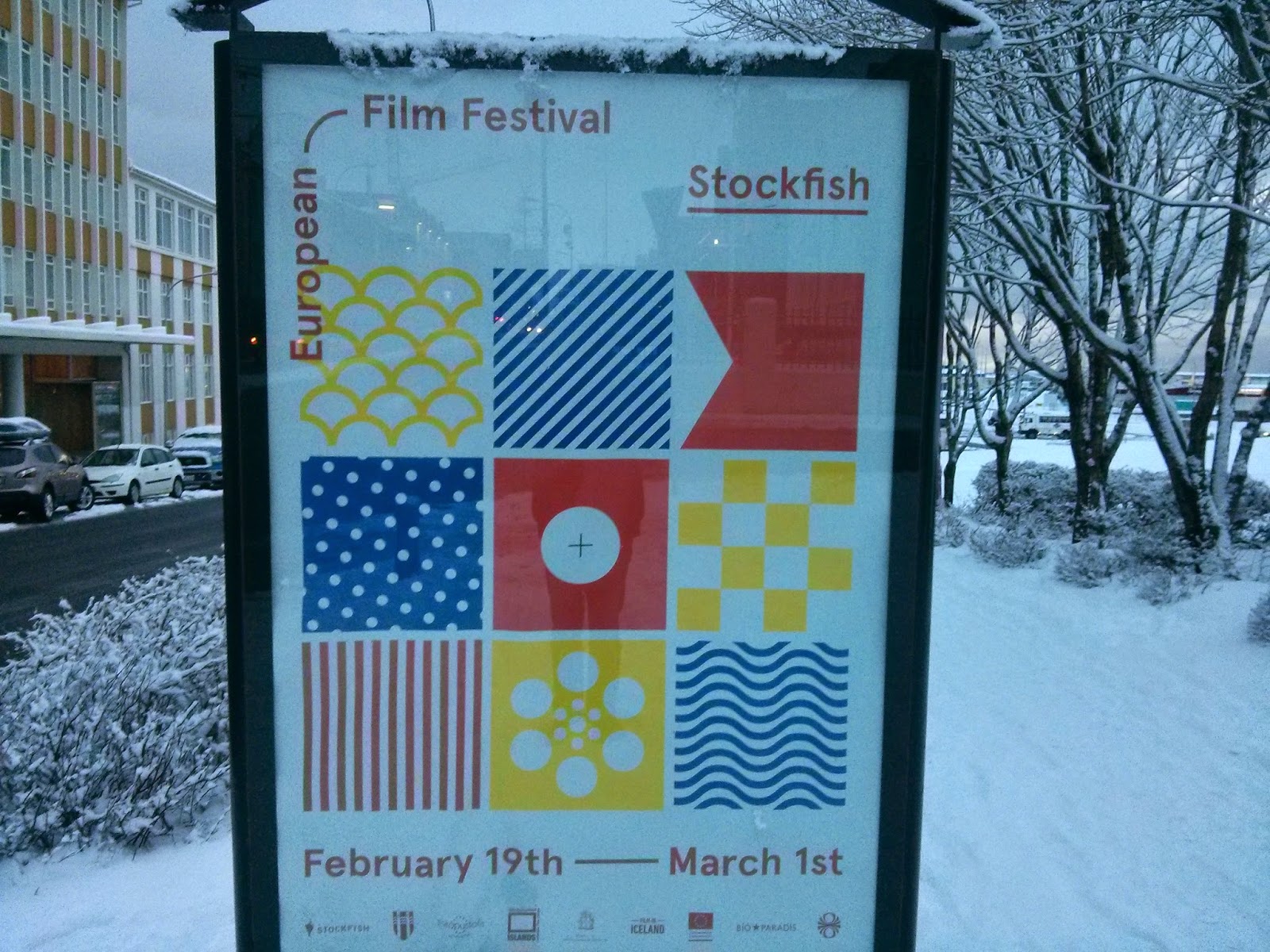 Round 1 is tomorrow so it’s time for some serious stuff – preparation, playing, food and rest. Rinse and repeat in the next 10 days.

By Alex Colovic  on Mar 05,2015
My Tournaments Personal - No Comments
Very soon I’ll be travelling to Reykjavik to participate in one of the best open tournaments in the world, the Reykjavik Open (10-18 March). I played there last year and I was fascinated by everything – the perfect organisation, the landscape, the country, the cold (and I hate cold!), the air, the lack of traffic and the general atmosphere (everything is so cool there, pun fully intended). 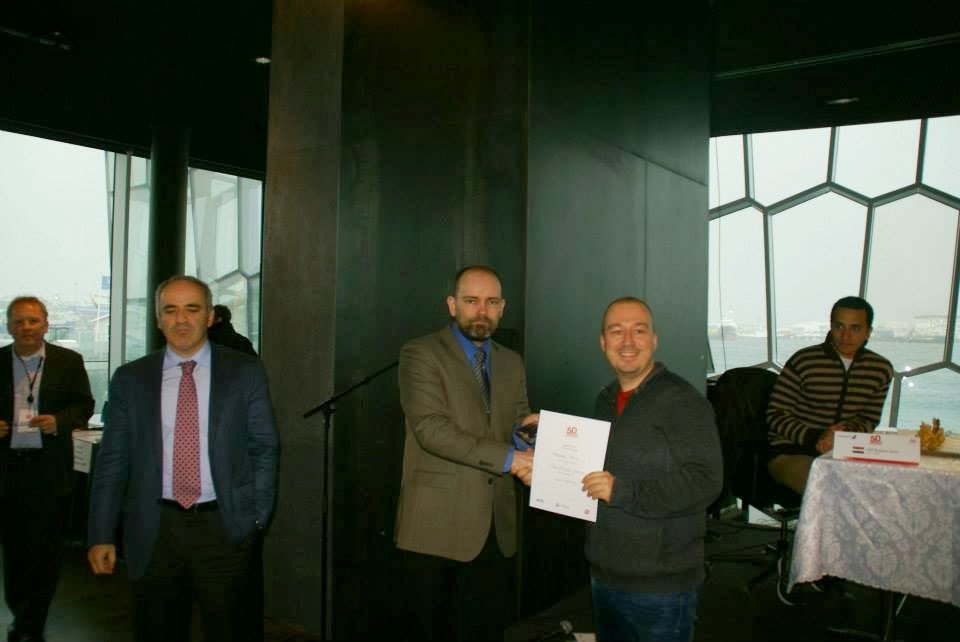 The Charm of the King’s Indian Defence

By Alex Colovic  on Feb 27,2015
Openings Personal - 3 Comments
I have been looking at some KID lines recently and I remembered how exciting this opening is. I played the KID with black until around 2000 (with pretty good results) and then from 2008 I switched sides and started playing against it with white.

The following game is from the Berane tournament I won back in 1998. It was a category 8 round-robin tournament with 14 participants and lasted for two weeks (there was even a free day in the middle of the tournament). The blasphemy of two games a day didn’t even occur to people back then. My score of 9.5/13 also brought me my first GM norm. I remember that my daily routine was get up around 11am, take a walk, eat lunch, prepare for the game, play the game, eat dinner and read Shakespeare’s Complete Works before sleep. In those two weeks during the tournament I read all the plays and almost all of the sonnets!

This game is also one of the most spectacular games I’ve ever played. The following diagram shows the star move of the game:

My opponent was Julian Radulski, who would later on become a good friend, a GM, and achieve rating of over 2600. Julian tragically died in 2013 at the age of 41, but he is fondly remembered by anyone who knew him.

The opening phase of the game is not of much interest today, but the character of play that followed is very much in the best spirit of the KID. I start my comments from the moment the real chaos begins. Here’s the game and you can enjoy it together with the lines that remained unplayed:

By Alex Colovic  on Dec 24,2014
Personal - No Comments
Wishing you all Merry Christmas and all the best in the new year.
A few days ago I ran into the following video by chance, but I still cannot get it ouf of my head. I think it’s an appropriate greeting for this period of contemplation of the past year and looking forward to the next one. Just remember to relax after watching it.

By Alex Colovic  on Oct 25,2014
Personal - 1 Comment
Here’s an interview I gave for one of my students’ website:

It’s about general ideas in chess, a bit on my beginnings, some advice. It’s about 5 minutes long, enjoy it!

By Alex Colovic  on Sep 02,2014
My Tournaments Personal - 2 Comments
A tough tournament for me, but a win in the last round is the best cure for all the troubles during a tournament. The final position deserves a diagram:

This win brought me clear second place and I can rue my missed chances in my games with Bogdanovski and Dancevski in rounds 7 and 8 when I only managed to draw completely winning positions. You can download the games from the tournament here: http://www.chess-results.com/PartieSuche.aspx?lan=1&id=50023&tnr=143606&art=3

Pancevski won deservedly, with 7/9, he played solid chess throughout the event and was never in any danger. The others had their ups and downs and this was reflected in the large share for 3rd place – 8 people with 6 points. Since I rarely play in Macedonia, it was a pleasant surprise for me to find out that there’re a lot of young players coming in. It is a positive trend and let’s hope it continues.

In Saint Loius Caruana’s 5/5 reminded me of Reuben Fine’s 5.5/6 in the AVRO in 1938 (this was also noted by Kevin Spraggett on his blog). Carlsen finally won a game in his style (with black against Aronian) while Topalov beat Vachier in a Najdorf when the latter misevaluated the position with the opposite-coloured bishops. Aronian and Nakamura seem sub-par so far. The tournament continues today with the second half and it is Carlsen, if anyone, who can try to mount a challenge to the fabulous Fabiano.

By Alex Colovic  on Aug 30,2014
Personal - 2 Comments
I’m having a tough time in Struga so I don’t feel like writing about it right now, but there was one instructive moment in my game from round 3. I was white against Nikolovski:

This position arose as a sequence of some forced play and I already had this exchange planned (besides, taking on a6 gives black counterplay) because I remembered a game by Smyslov where he won a similar rook endgame. After the game I went through his Letopis shakhmatnogo tvorchestva (his best games collection in Russian) and found it:

White won convincingly in both games.

On the other side of the globe, in Saint Louis things heated up right from the start. No time to go through the games, but Caruana continues to impress! After several hiccups when approaching 2800 earlier in his career, now he’s confidently marching up towards Carlsen’s stratospheric rating, who continues with his irrational style and weird openings.

And one more thing I noticed: after not qualifying, but still playing the Candidates, thanks to Kramnik’s win in the World Cup, Karjakin seems to like it when things come to him without him moving a finger. Some people really quickly get used to things coming to them as gifts. He said he won’t decline his chance to play the world championship match if Carlsen refuses to play in Sochi and will prepare hard for Anand! He even went that far to compare his situation to Karpov’s in 1975 when Fischer refused to play. He probably has some gaps in knowledge of history because Karpov actually qualified to play Fischer by beating everybody else in matches. And of course, the inevitable mention of his sponsor and his goal of bringing the crown back to Russia, blablabla… Can please somebody tell this guy to shut up?

By Alex Colovic  on Aug 23,2014
My Tournaments Personal Tournaments - No Comments
I have never been to Saint Louis, while I have been in Struga countless times, but I don’t think these two places have much in common. However, at the end of August both these places will host a chess tournament, albeit of quite a different kind.

Starting on Monday the Macedonia Open will start in Struga. Generally a local tournament with a modest prize fund (although with an increase from last year) this tournament rarely has more than 30-40 participants. Usually I play elsewhere in this period, Bratto in Italy being my preference in the last couple of years, but this year due to the Olympiad and the failure to agree conditions with other tournaments abroad (like Trieste, Cesenatico and Imperia) I decided to take part.

Saint Louis hosts a tournament of a different kind. It starts on Wednesday with only 6 participants, but their names are pretty familiar – Carlsen, Aronian, Caruana, Nakamura, Topalov and Vachier-Lagrave. A double round-robin with a serious prize fund of $315 000. It’s one of those tournament that we all look forward to. It will be tricky to blog about it while playing myself, but I will definitely be paying attention to the games played.

The World Champion is a hot favourite in every event he participates and this time even more so, after his shaky play in the second half of the Olympiad. Aronian and especially Caruana will try to cause an upset, while I expect Topalov and Vachier to be the tail enders. The local player Nakamura should be somewhere in between – the expectations of his nation are high but his dolce vita in Italy is yet to produce good chess results.

You can follow the Struga tournament on the chess results page http://www.chess-results.com/tnr142153.aspx?lan=1 currently with an updated list of players, while the Saint Louis tournament’s home page is http://www.uschesschamps.com/node/499