By Alex Colovic  on Aug 14,2016
Tournaments
Against all odds, Svidler won. And the only player he could win against was another player suffering from bad form, none other than Giri.

Svidler learned from his loss to Ding Liren in Round 6 and in the same position after move 3 he went for the more solid 3…c6. In the comments to the game with Ding I also recommended a more solid approach when things don’t go well, and Svidler seems to have come to the same conlcusion. However, it was Giri who decided to be bold and, as expected and seen from Svidler’s example, it backfired. This is just another proof of what I was saying earlier – when in bad form optimism and confidence are not your best friends. Here’s the first half of the game:

Another player who won was Aronian. And guess what his opponent, Nakamura, said after the game – the he got sick the previous night!!! Excuses again, sickness, food poisoning, laptops, cats, preparation… Tartakower always comes to mind when I hear excuses (“I have never defeated a healthy opponent.”) Be that as it may, I am 100% certain that these excuses are 100% valid and true, just making them public looks a bit lame. Anyway, Nakamura at least tried to play solid when not feeling too well, but when things go against you, there’s nothing you can do. I admit this sounds fatalistic, but my own experience and the experience of the players we are following now in Saint Louis point to that conclusion.

The derby of the round So-Caruana ended with an uneventful draw, the players repeating several games played in the same way before them, the drawing line first introduced in the game Svidler-Topalov from the Candidates in Moscow.

The old rivals Anand and Topalov played a very exciting Berlin endgame. Like I have said before, it is not the opening, it is the players who make it interesting or dull. I cannot recall a dull game between these two, so it is no surprise they found ways to stir it up yet again.

Ding Liren played it safe against Vachier, didn’t take a sacrificed pawn in the opening, rightfully fearing the Frenchman’s preparation, and calmly steered the game towards a draw. It is tough for newcomers in these elite events – in order to be invited again (and remain in the elite) they need two things: a good result and exciting play. But this combination is almost impossible to achieve, so usually they limit themselves to the first part of the equation. You can’t blame them.

The last round is under way and So secured himself a share of first. Now all hangs on Topalov, if he can catch him by beating Aronian (good chances for the Bulgarian as I write this). I’ll look into the final round tomorrow!

And a reminder of the still unsolved monthly puzzle at Goldchess, worth $200 (see the site for detailed instructions). 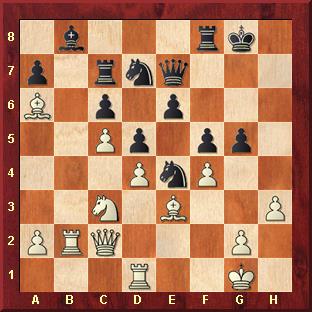