By Alex Colovic  on Oct 26,2015
My Tournaments Personal
It was obviously difficult to write on a daily basis when playing every day, but now the tournament is over I can share my experience and impressions.
First, the organization. I liked it, it was comfortable in the huge playing hall, and most importantly there was a lot of space between the boards – I have witnessed way too many crammed up team tournaments so it was very pleasant to be able to feel your space. Another thing I liked was the relaxed atmosphere inside the playing hall. Let me explain: the last years have seen increased draconian measures towards the players (zero tolerance, prohibition to leave the playing hall etc.) and this has made the arbiters feel very powerful. I have experienced this many times at Olympiads and European Team Championship, when they show no respect towards the players and have no problems to disturb you during play for whatever reason they feel they should. This time it was different, I felt respect towards the players and no tension in the air waiting for an arbiter to tell me off for something. I even tested this by not wearing my ID card while walking around the boards (a common provocation of mine!) and I was notified only once for that by an arbiter. I think this is very important for the chess players, to feel the respect they deserve and to feel that they are the main protagonists and not the arbiters and the organisers. Alas, recently is has more often that not been the other way round.
And now to the tournament itself. Siberia (Kramnik, Aronian, Grischuk) won rather comfortably, never really being in danger in any match. They were led by Vladimir Kramnik and his phenomenal 4.5/5 on Board 1. His victory against Topalov (who objected to the special lamp Kramnik was using in the previous rounds – Kramnik probably inspired by Botvinnik and Fischer) must have been especially sweet.
Socar (Topalov, Giri, Caruana) finished second, a slight regress after winning two titles in a row, while Mednyi Vsadnik (Svidler, Dominguez, Vitiugov) finished third. The fight at the ECC is so intensive and nerve-wrecking that only the strongest and most resilient achieve success. Congratulations to the winners!

Cheddleton’s performance was excellent, in spite of the disappointment of the last two rounds. We had a tough start but then we won three matches in a row and were in a fighting chance for a great result – had we won at least one of the last two matches we would have been in the Top 10 or close. I think it is better to be in a chance for a great result and miss it than never be in a chance at all. Alas, we lost those matches minimally, 3.5-2.5 and finished approximately where we were ranked before the tournament. It was a wonderful experience for all the players, the atmosphere was always positive, the spirits were high and we thoroughy enjoyed it. We were the best placed English team and the first outing of Cheddleton in Europe was a success. Here I would like to thank my team-mates, David, Vlad, Ezra, Keith, Fiona and Malcom for the great time! Below you can see our performances (click to enlarge):

A few words about myself. I had a great tournament, scoring 5.5/7, which together with a few other players was the best overall score in the whole tournament as nobody managed to score 6 points. Additionally, it brought me the highest score on Board 4, ahead of the likes of Adams, Wang Yue, Andreikin, Radjabov, Vachier and the others. I was really proud to see my name top this list: 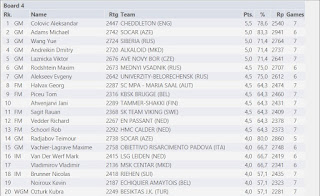 My play was stable and I was winning (or close to winning) in all the games I drew. This tournament was a big improvement on all the other tournaments this year, where I was struggling with my form. The sustained work I managed to do in the last few months bore fruit and I am satisfied with the results. My finest effort was my black win against GM Greenfeld from Beer Sheva.

I am very happy to have been part of this wonderful competition and I hope Cheddleton will continue the ride next year in Novi Sad!

As a special bonus to my readers I can announce the publication of exclusive interviews with several elite players! The audio tracks need to be put into words, so please be patient and stay tuned!