By Alex Colovic  on Sep 07,2015
Books
Recently I came to know of a new book that should interest people interested in chess and history. The name of the book: 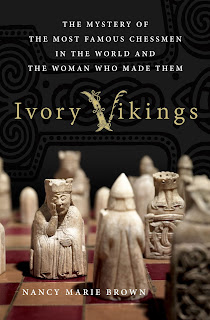 I have only read a bit so far, and may write a review later on, but it does speak a lot of King Magnus. Many of them actually. Here’s a little excerpt that speaks ominously of our present chess king (note the age of death and the time on the throne):

If the Lewis chessmen were carved in the last decades of the twelfth century,
two of the kings on our chessboard are Sverrir, who reigned from
1184 to 1202, and the king he deposed, Magnus V, who was crowned in
1164. Magnus V was killed in battle after twenty years on the throne: He
was then twenty-eight. Sverrir was twenty-four when he first claimed the
crown. Both are fantastic characters who challenge our assumptions of
kingship in the Middle Ages and of the limits of the Norwegian realm.
Neither spent much time in the city of Trondheim. Neither provided the
stable, wealthy royal courts we assume an ivory-carver would seek out.
Nor had the kings who preceded them.

You can read and download a larger version of the excerpt here.

I have always been fascinated by mythology and history (I really enjoyed reading Beowulf at University) and the book seems interesting so far. There’s a lot of fighting and harsh punishments, thus relating closely to our beloved game. Will keep you posted how it goes!