By Alex Colovic  on Sep 15,2014
Tournaments
It is a very curious situation that one city should host two top-level tournaments at the same time! I cannot recall another example of this year’s Bilbao tournaments – the European Club Cup and the Chess Masters Final both start on the 14th and last until the 20th of September.

Starting with the Chess Masters, my main interest will be to see how Anand will do before he closes down shop and intensifies his preparation for the match with Carlsen. And today (OK, yesterday, since it’s after midnight already!) he didn’t disappoint at all! In fact, his victory against Ponomariov was rather impressive, but the major part of the work was done in the opening, (or, rather, by the opening).

The h3 system against the KID (also called the Makagonov System) has been a real killer of late and the biggest problem for the KID players. Actually, only when discovering this system did I decide to fully switch to 1 d4 and my results with it were 100% (10 out of 10) until I lost a game from a completely winning position a few months ago. So it was no surprise that Anand chose it and obtained an advantage. When analysing this system I noticed that even life-long connoisseurs of the KID get thoroughly outplayed and are made to look like they don’t understand the opening. Just to give you an idea, here are two experts of the opening who ended up in embarassing positions:

Ponomariov didn’t fare better either, here’s the position after move 18 (in fact, 18 Qd5, instead of 18 Nc3xd5 was even stronger and probably winning!): 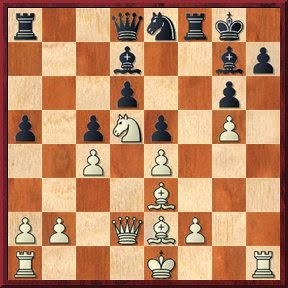 The other game, Vallejo-Aronian was also exciting. Vallejo’s early novelty brought him only trouble, but his recent fine form seems to continue as he managed to stir up enough counterplay to confuse even the great Aronian (or is it perhaps Aronian’s poor form that prevented him from using his advantage in a better way?) The game ended in a draw and Anand again (like in the Candidates) gets an early lead in the tournament. This further increases his self-confidence and the trend is definitely in his favour!

The biggest surprise however was in the game Sandipan (2619) – Frischmann (2254) where the following position was reached after white’s 27th move:

The result? White lost!!! How on earth can that happen to a player of Sandipan’s caliber?? Let’s take a look. First he improved the position by pushing up the board and reached this position: 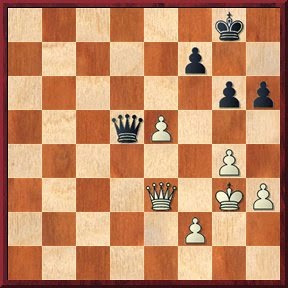 Now he decided to transform his advantage and pushed 42 e6, but this surely was based on a miscalculation because the pawn endgame is drawn (he could have continued to press in the queen endgame instead).

And here came the suicide. 47 Kc7??? After this black simply walked to the f2 pawn and queened his e-pawn.

If you ask me how is it possible for a grandmaster to blunder like this, the answer is I don’t know. I only know that anything, and I mean literally anything, is possible in one game of chess.